Originally called Eagles Nest Point, it was renamed Split Point in 1913. It is a cement-rendered concrete and crushed rock tower, however the original drawings show that it was intended to be constructed of stone. The contractors, Messrs. R. Anderson & Sons (Anderson was a stonemason, originally from Scotland), had great difficulty getting materials to the site. An effort was made to transport materials by sea from Melbourne, but that route had to be abandoned, as the vessel employed to carry the supplies was wrecked through heavy weather on the coast. The stone was quarried locally at Lookout Hill and the ironbark timber was obtained close to the lighthouse.

The tower design is modeled on that of a chimney as this structure promotes air flow from the base to the top. This greater air flow made the kerosene (and later, acetylene) flame shine brighter.

This lighthouse was made famous due to the children’s TV show filmed on location. Round the Twist is a Logie Award-winning Australian children’s television series about three children and their father who live in a lighthouse and become involved in many magical adventures. 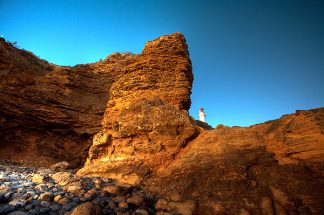